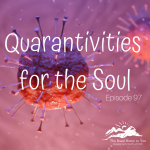 Anxiety, fear, grief, anger…these and so many more are the emotions that so many are feeling during these uncertain Corona Virus times.

Listen to the Full Episode Here

Today, Matt and I have a long-distance conversation about some of the ways we can not only take comfort in the promises of God during this time, but also very specific activities (or, as our daughter has dubbed them “quarantivities”) to fill our time wisely and with fun!

It must be said that in the less than 24 hours since recording this, things have changed here in the US and also with me, Brandy. While much of our conversation is focused on dealing with anxiety, I rather ironically, have been feeling my fair share of it. That being said, I remembered this conversation and took a dose of my own advice (“listen to music” and “turn off the news for a minute”) and am feeling markedly better.

This isn’t just lip service. This advice is practical and beneficial. I hope you take it and share it with people you love.

Self-Care and Activities During Quarantine:

1. Pray
2. Read the Bible: Psalms are great – try Psalm 23
3. Journal
4. Write letters and send them to loved ones
5. Listen to music you love
6. Spend time with your kids: Conversations, shooting hoops, video games, reading books, crafts, etc…
7. Go for a walk: fresh air + Vitamin D = good for ya!
8. Jigsaw puzzles
9. Complete your To-Do List: or at least knock it down – all those projects that you’re saving for “someday”
10. Work on a dream project: write the book, learn the instrument, read the series…

1. Steady stream of news: Stay informed, but don’t only feed on a media diet of the news
2. Hours of Social Media: See above…
3. Binging on Netflix for the entire time: Give yourself limits and keep your body and brain active

Your mental health is just as important as your physical health during this time, so don’t neglect it!

If you’re struggling with depression or thoughts of self-harm, please contact the

Special thanks to the Jingle Punks for the use of their song, “Dusty Road” as our intro and outro.

This episode was recorded remotely and edited and produced at 4G’s Studios in Sandy, Oregon. Copyright 2020. All rights reserved.

Gather up the family, snuggle by the fire and listen in as Matt reads the story of the birth of Jesus from Luke 2:1-19.

Our Catalog:
Past Episodes

Special thanks to James Swanson for permission to use the KJV 401 Reader’s Edition. You can download your own through Amazon.

Special thanks also for the use of “Silent Night (Holy Night)” as our outro music: by Alexander Nakarada
https://www.serpentsoundstudios.com
Music promoted by https://www.free-stock-music.com
Attribution 4.0 International (cc BY 4.0) https://creativecommons.org/licenses/by/4.0 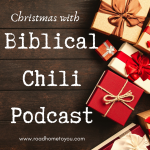 A Christmas dramatization from the podcast, Biblical Chili!

We raise statues, monuments, and headstones to commemorate those we’ve lost and victories won. But what about the memorials and monuments to remember what God has done?

Join Matt and Brandy as they look at some of the Old Testament monuments that the Israelites erected. They’ll also explore different monuments we have and can find in our own lives in order to be reminded of God’s faithfulness.

Joshua 4:20-24
Those twelve stones which they had taken from the Jordan, Joshua set up at Gilgal. He said to the sons of Israel, “When your children ask their fathers in time to come saying, ‘What are these stones?’ then you shall inform your children saying, ‘Israel crossed this Jordan on dry ground.’ “For the Lord your God dried up the waters of the Jordan before you until you had crossed, just as the Lord your God had done to the Red Sea, which he dried up before us until we had crossed; that all the peoples of the earth may know that the hand of the Lord is mighty, so that you may fear the Lord your God forever.”

Psalm 77:11-12
I will remember the deeds of the Lord; yes, I will remember your miracles of long ago. I will consider all your works and meditate on all your mighty deeds.

You can also email us with stories about your own monuments
roadhometoyou@gmail.com

Special thanks to James Swanson and James Page for their contribution to our theme song, The Long Road Home, written by Brandy J. Goebel. Copyright 2018.

This episode was recorded, edited and produced at 4G’s Studios in Sandy, Oregon. All rights reserved.

The most important road trip ever taken was over 2,000 years ago when Jesus walked the road to Calvary. It wasn’t a glamorous road trip. There were no fancy drinks along the way, no stops to take in the sights. There wasn’t even a grand destination to look forward to at the end.

But that one trip gave each of us the opportunity to have a face-to-face relationship with the one true God.

This is our final January Flashback episode. Next week we will be back in the studio with all new material. We look forward to seeing you then!

Special thanks to Jim Swanson and James Page for their help with our theme song, “The Long Road Home”. Copyright 2018.

Recorded at 4G’s Studios in Sandy, Or. Produced and edited by Brandy J. Goebel. All rights reserved.

The election is over. Our witness is not.

Tune in this week to hear us talk about how we, as Christ followers, can navigate this political environment we live in.

Jesus didn’t spend His time fighting the government systems that were in play while He walked this earth, so why do we feel so compelled to? Is that the best way to carry out the Great Commission? What if we’re going about this all wrong?

The election may be over, but no matter how you voted I think we can all agree that the hostility that is brewing on both sides of the political fence is going to continue to affect us all. It’s vital that we consider wisely how we carry ourselves through this time.

Your message is showing. Make sure Jesus is in it.

Stepping out of the car at St. Ignatius Mission in Montana, the air was thick with smoke from recent fires throughout the western US and Glacier National Park. Everything was quiet and still.

Before us stood the Mission Church, the place where, in approximately 1890, my great, great grandfather, Eli “Kelly” Cyr was raised from the age of 8, after his mother died of lung fever. The eldest of 5 children, Eli and his brothers were sent to St. Ignatius Mission while his two younger sisters, under the age of 2, were sent to live with relatives until they were old enough to join their brothers.

“The Mission, and the town that grew up around it, was founded in 1854 by Jesuit missionaries and named for their founder, St. Ignatius Loyola. In the following years it was the home of the first Jesuit theologate and industrial arts school in the Northwest, the first Catholic Sisters and Catholic school in Montan, and the first hospital, sawmill, flour mill, printing press, carpenter shop and blacksmith shop in the Mission Valley.”
– excerpt from St. Ignatius Mission: Historical Site. 1977

“Main Street of St. Ignatius with Mission Church and School in background about 1895.”

During his time at the Mission, under the tutelage of the brothers and sisters, Eli learned how shoemaking, music, and cooking. Each of these skills proved beneficial as Eli struck out on his own, eventually marrying and having a daughter. Through the years, he was a cobbler, a bandleader, and the owner of a confectionary and a restaurant.

While the Mission was founded in 1854, this church wasn’t built until the 1890s and is one of the last remaining buildings affiliated with the Mission due to multiple fires and lack of funding.

Construction of the Mission Church was completed in approximately 1893. Walking through its thick, oak doors one is immediately met with an impressive array of murals covering the walls and ceiling. These murals were all painted by the Jesuit cook and handyman, Brother Joseph Carignano. Brother Joseph had no formal art training, but he did have a vision and a dedication to the project he felt called to.

The three paintings behind the altar are representations of three visions that St. Ignatius Loyola had. Above, is a depiction of the Last Judgement.

Though the Mission Church was not fully completed before Eli Cyr had grown enough to strike out on his own, and while many of the buildings were destroyed by fire, there are still remnants of what was there during his time.

The flour mill now. Just a shadow of its former self, yet beautiful all the same.

The flour grinding stones that remain are now located near the Mission Church as a testimony to the productivity of 70 years.

St. Ignatius Mission was a vast community in its heyday. There are no longer records to let us know how many boys and girls came through its doors as students or orphans, much less the Jesuit Brothers and Ursuline Sisters. And while many of its buildings are no longer standing, it is a treat to walk through the grounds and get a sense of the history.

Built in 1854 by the Jesuit Fathers and Brothers, what is now the Mission Museum was originally a log cabin that the Brothers slept in. The upstairs is no longer accessible as it has been ceilinged off.

I do wish I knew some of what my great, great grandfather thought about his time there. There aren’t any actual stories from him that have survived time, just shadows that he passed on to his daughter, faint traces of a young boy who, for the most part, enjoyed his time with the Sisters, especially in the kitchen.

It was an absolute joy to make a connection, however distant, to someone I’ve only heard and read stories about. Eli was a man who, like us all, struggled with his faith and how to live it out. I’m sure he didn’t do it perfectly. But he did it.

As an adult, he helped build a church or two. He and his wife, Clara, were constantly opening their home to whatever Father, Brother or Sister was coming through their small town. Their hospitality was bigger than their budget and everyone seemed to be blessed by their friendship.

And while my family now is not Catholic, it’s good to be able to see a bit of my ancestral past and know that there is a heritage of faith that has been built through the generations. I hope it will continue to grow for many generations to come.

Tune in next week to see more of our travels…

Until then, Love God. Love people. Pray hard.
-B. 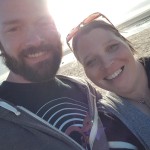